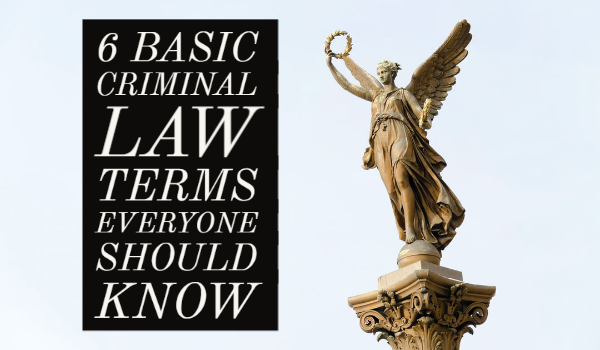 Whether or not you are involved in a criminal legal matter, it’s good to know some basic criminal law terms. These terms are things that are commonly misunderstood when it comes to criminal law and criminal defense.

While these terms might not be relevant to your right now, they could be someday. Every year, there are $34 billion worth of slip and fall accidents. Some of these do become criminal matters, depending on the circumstances.

Things like a slip and fall can be a surprise no one sees coming. That’s another reason it’s important to brush up on your criminal law knowledge before it becomes an urgent necessity.

Here are 6 basic criminal law terms to get you started understanding more about criminal law. 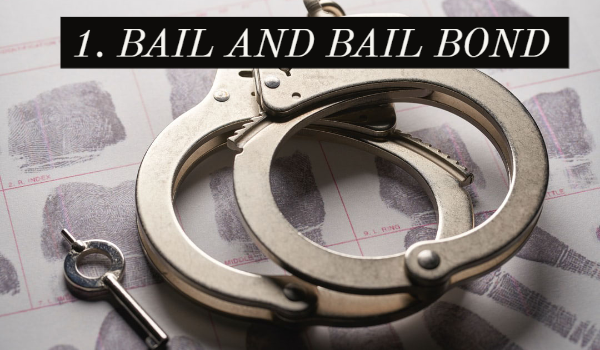 Bail is a broad term that can encompass many things. Most of us have a vague understanding of bail as money that someone pays to be set free when they are detained. However, bail is actually far more complicated than the simple definition suggests.

Bail is not a get out of jail free card. Far from it, in fact. That’s why this is one of the basic criminal law terms that is most important to understand.

Few people really know what bail means until it is necessary for them to learn. Bail can allow someone who has been arrested to get out of detainment in exchange for money. The money that’s paid is the bail. It is a promise to the court that the defendant will return at a later date for their court dates.

Bail is not a fee that is paid and never recovered. It works because the defendant is supposed to get their bail back after they show up for their court dates. This is supposed to be the enticement that ensures their compliance with court dates.

This is important because the time between an arrest and an actual court date can be quite long, months away in some cases. Defendants aren’t found guilty or not guilty of anything during that time, so they shouldn’t be detained. Plus, no one wants to be detained. Bail allows defendants to be released while they’re waiting for their day in court.

Bail might also be referred to as a bail bond. Bail bond is very similar to bail and may be used interchangeably. Technically, a bail bond is the bond you give to the court as a promise that you’ll come back for court dates. This differs very little from bail itself.

There are also some basic criminal law terms that are specific to bail itself. If a defendant posts bail but doesn’t come back for their court date, that is referred to as “bail-jumping.” The person who is receiving the bail is the bailee. And a bailer is someone who is providing bail.

If bail is set very high, perhaps even unreasonably high, it is referred to as “excessive bail.” This will depend on the circumstances under which the defendant was arrested, including what kind of crime they are accused for. Judges often set bail based on a whole host of factors, so in order for bail to be excessive, it will depend on all these factors. 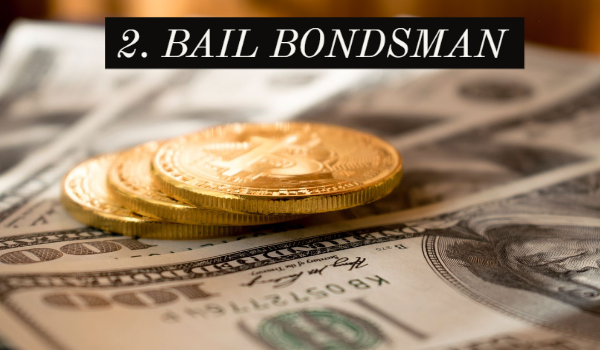 There is another very important player in the discussion about bail and bail bonds. That person is the bail bondsman.

A bail bondsman is not always needed, but sometimes a defendant will call a bondsman in order to help make bail and be released. A bondsman provides a bail on the defendant’s behalf. They are sometimes also called a bailer or bail agent.

A bail recovery agent is sometimes also called a bounty hunter. They can find, arrest and bring in a defendant who has not shown up for a scheduled court date.

Both of these professionals are trying to ensure different types of bonds are paid back and honored. The most common kind of bail bondsman is the surety bail bondsman. They provide bail for most common kinds of crimes and expect a 10-20 percent fee on top of that bail from the defendant, typically.

It can be confusing trying to keep track of so many similar terms for more or less the same things, but these basic criminal law terms are important to distinguish between. Lawyers and courts care a lot about these minute distinctions.

All of this goes through a bail bond agency. Bail bond agencies operate so that bail bondsmen can connect with defendants who need to pay bail. They help set up contracts and get bail posted so defendants can be released as quickly as possible.

Of course, these agencies, or, more specifically, their agents, do collect a fee. Any time you work with a bail bondsman, you are also working with a bail bond agency that may have several bondsmen.

Bail bond agencies are often open 24-hours a day. This helps them better reach out to defendants. Arrests are not predictable. They can happen at any time of the day or night. Therefore, bail bond agencies need to be flexible in order to best serve defendants trying to post bail.

Bail bond agencies will be familiar with all the basic criminal law terms and procedures. They can write up a contract that allows them to post bail on someone’s behalf, under certain conditions. These conditions will include their 10-20% fee and potentially other stipulations.

For example, a bail bond agency might collect some kind of collateral. This helps make them feel more secure that the defendant will return for a scheduled court date. Bail bond agencies take on risk regarding a defendant and that’s why they seek collateral and compensation. 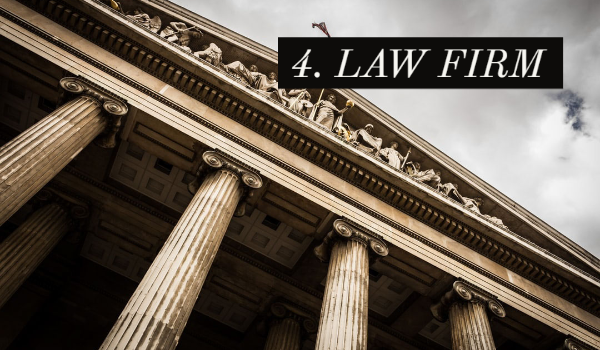 Courts and bail bond agencies are not the only professionals you may come in contact with if you are involved in the criminal justice system. Another very important player is lawyers and attorneys. These professionals will typically work for a law firm, so let’s discuss what a law firm is and some basic criminal law terms you need when interacting with them.

The term “law firm” encompasses a lot of different things, so it is hard to pin down any one simple definition for this phrase. Put very simply, it is a business formed by a group of lawyers. However, there is a lot more going on than that.</p.

For example, there are many different types of law firms. If you are caught up in legal matters it’s important you know these basic criminal law terms so you don’t end up contacting a law firm that can’t actually help you in your situation.

One step up from this are small law firms. These aren’t solo law firms, but they don’t have as many lawyers as some of the bigger firms. They may have two lawyers or as many as 10. This can be a positive as it offers a more personal interaction. However, it can also be a detractor if none of those lawyers specialize in what you need.

Finally, there are large law firms. These are sometimes also called “full service” law firms. There could be dozens or even thousands of employees at these kinds of firms, from lawyers to administrative staff to HR and paralegals and more.

You are sure to find someone at a full-service law firm who can help you, but these kinds of firms can also be so huge that they’re overwhelming to someone who might not be very familiar with the law and basic criminal law firms. This can result in something that feels like a very impersonal experience. 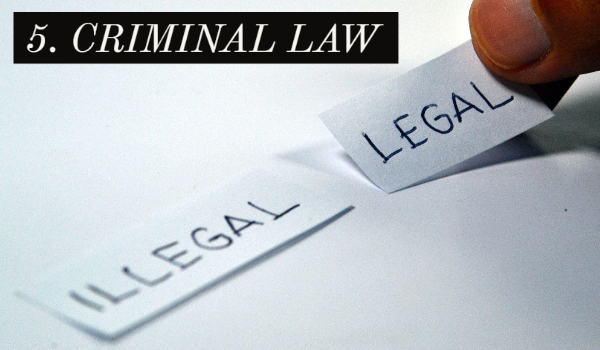 Lawyers at a criminal law firm will represent a defendant for criminal matters such as a DUI or some other crime where a lawyer is used instead of a public defender. There is an important distinction to be made between public defenders, lawyers, and attorneys.

Public defenders are for people who can’t afford a lawyer. This type of lawyer is appointed by the court to a defendant and can provide legal counsel free of charge to the defendant. Rather than working for a law firm, a public defender will be part of a government-funded public defender’s office.

Most of us have some sense of what a public defender is, even if we don’t have a strong gasp of many basic criminal law terms. We hear about public defenders enough to understand the basic idea. However, when it comes to lawyers and attorneys, these basic criminal law terms are often used interchangeably. There is a difference between these two, however, and it is an important one to learn.

Lawyers and attorneys are very similar. A lawyer is just someone who practices law. An attorney, in contrast, is someone practicing law in a courtroom. So a criminal law attorney is a lawyer who will represent their client in the actual courtroom. This is different from a lawyer, who may or may not actually practice in a courtroom setting.

This distinct bear’s closer scrutiny, which we will provide below, but criminal attorneys are the kinds of lawyers you think of being in court with their clients speaking to the judge on their behalf. They are a crucial part of a robust criminal defense. 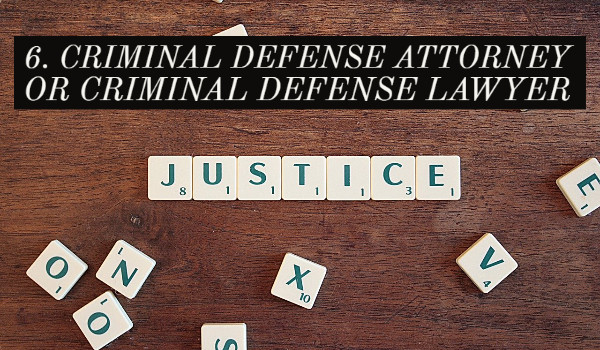 So, which kind of lawyer do you need if you are a defendant in a criminal case? Well, that will depend a lot on your individual circumstances. That’s why learning basic criminal law terms is so important. It can help you find the right type of representation so you get the best outcome possible from your situation.

If you know you will have to go to court, you should make sure your lawyer in a criminal defense attorney. It will be vital to your success in your case to have a trained legal expert on your side when you appear in court.

One reason for this is because of legal jargon. Even basic criminal law terms like lawyers and attorneys can get confusing. A criminal defense attorney has studied and trained for years to be able to understand all the lingo and guide you through the legal process.

If you are arrested for a criminal matter, you should contact a criminal defense lawyer as soon as you are able. They can work with you through every step of the process, from arrest to criminal investigation to charge, sentencing, appeals and post-trial issues. You don’t want to go through any of those things without the help of a trained legal expert.

Get the Right Help

No matter why you might need to know some basic criminal law terms, you may find that knowledge gives you power and agency in your situation. Things may feel overwhelming, but getting the right help on your side quickly can mitigate a bad situation. You don’t want this to linger on too long, so understand the terms, figure out bail if necessary and ensure you have a lawyer to help you navigate the system. You never want to go it alone in these kinds of circumstances.